Vetulonia was once one of Etruria’s 12 ruling cities, until it was simply lost to history. Today only the outlines of its buildings and streets remain and a magnificent museum dedicated to these jewellery making masters of a pre-Roman era.

Vetulonia has Etruscan origins. It was, by 600 BC, part of the Etruscan League of 12 cities. Dionysius of Halicarnassus places the city within the Latin alliance against Rome in the 7th century BC. Clearly things didn’t go well because the city simply dropped off the map.

Vetulonia seemed destined to remain a legend, until in May 1880 Isidoro Falchi “a physician in the service of archeology” stumbled across three Etruscan coins in Colonna di Buriano. Those three coins led to years of investigations and in 1887, the King of Italy, Umberto I, reassigned to Colonna di Buriano the ancient name of Vetulonia.

Vetulonia has three principal attractions. The first are the monumental Etruscan tombs found at the foot of the hill that hosts the city. All these tombs are covered by tumuli or grass hillocks, making them look a bit like hobbit holes. They can be reached along the Via delle Tombe, a well-marked dirt road. Keep an eye out for the The Tomb of the Pietrera, one of the oldest examples of Etruscan monumental tombs, dating around 630BC. Continuing along the road of the tombs you will find the Devil’s Tomb II and finally the Tomb of the Golden Fibula. These tombs also date back to the 7th – 6th centuries. B.C. Some of these tombs can be explored on the inside too and they’re all free to visit. 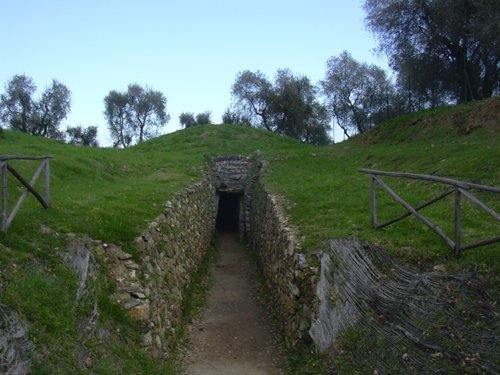 A lot of the treasures found in these tombs, jewellery, oriental vessels, wagons, helmets, shields, lances, statues and gold and silver coins bearing the ancient name Vatl (Vatluna was the place name Etruscan) are on display at the town’s museum. This should be your second stop in Vetulonia.

The third and final attraction is a little anti-climatic. In the town centre, you can see the remains of the Etruscan walls, large polygonal blocks enclosing an area of ​​about 16 hectares. You can also see part of the necropolises Isidoro Falchi excavated, but since funding is scarce, the site’s potential is still, for the most part, underground. Still it’s open Jun – Sep 10.00 to 7pm Tue – Sun, Jul-Aug seven days a week.